by William Parker / In Order To Survive 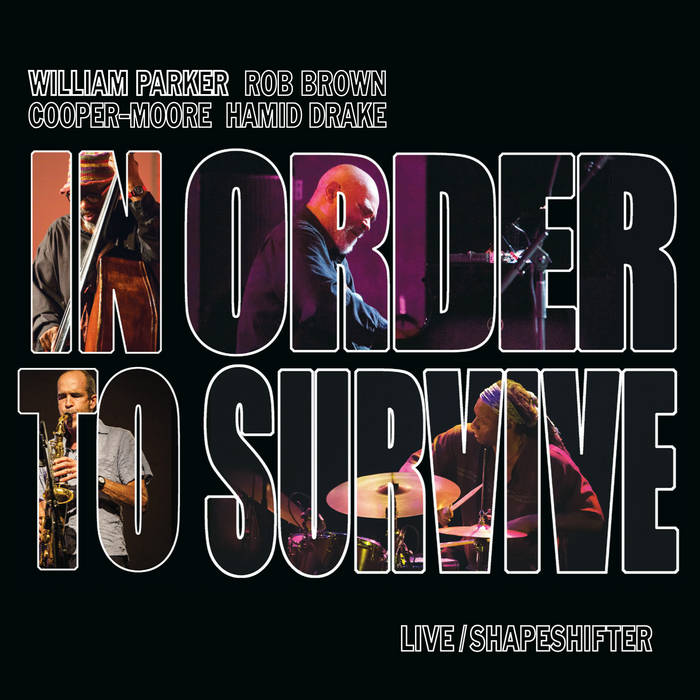 Tachymètre Any new album by In Order To Survive is a gift that keeps giving. This is no exception, as they continue their rejuvenated run of recordings. Shapeshifter has the clarity of the studio setting merged with the passion of the live setting and stands tall alongside their classics.


Live/Shapeshifter is the exemplary new double-album from one of master William Parker's eternal flagship groups, recorded live & featuring all-new compositions, including the extended suite "Eternal Is The Voice Of Love" and "Newark" (dedicated to early group member, trombonist Grachan Moncur III), as well as a new iteration of the band's theme. Featuring pianist Cooper-Moore, alto saxophonist Rob Brown and (since 2012) drummer Hamid Drake, In Order To Survive is one of the great jazz groups of the past quarter century.

Launched in 1993, In Order To Survive was Parker's first fully dedicated small group. It has always featured Cooper-Moore & Rob Brown, together with a series of drummers (including Denis Charles, and then Susie Ibarra) and occasional additional brass/reeds. A top live draw in New York during that heady decade, they made momentous visits to Europe as well. This initial phase culminated on record with their first double-live set, The Peach Orchard, an era-defining work released by AUM Fidelity in 1998.

In Order To Survive powerfully reconvened at the 2012 Vision Festival on occasion of AUM Fidelity's 15th Anniversary celebrations. That set of new work was released as part of the Wood Flute Songs box, hailed as a 5-Star Masterpiece by DownBeat, and as the #1 Archival Release of the Year by The Wire.

In October 2016, IOTS entered the studio for the first time since their Compassion Seizes Bed-Stuy session of 1995. This work was presented as one half of the exquisite double-album, Meditation/Resurrection, released in July 2017. Two nights were booked at ShapeShifter Lab in Brooklyn to celebrate its release...

"A mid-summer guided self-illumination" was promised on the handbill for these concerts. Live/Shapeshifter presents both astonishing sets of night two. Well beyond expressing the obvious, the album title states the shamanistic nature of the work at hand.
Enjoy!

// The Guardian Jazz Album of the Month //
"4 Stars. The distinguished bassist steers his talented band through a dynamic fusion of classic and contemporary." –John Fordham

"This set demonstrates these musicians’ mastery of the art of instantaneous transformation. Like the finest chamber music soaked in earth-tones, morphing as the topical tables turn, each instrumentalist imbues the moment with spontaneous virtuosity while exuding grit and refinement in turn." –The New York City Jazz Record, Marc Medwin

"Shapeshifter is the name of the Brooklyn performance space where these previously unheard compositions [except one] were recorded, but the title could just as readily apply to Parker's unerring ability to channel an infinity of ever-changing grooves – elemental manifestations intuited as though directly from the munificent consciousness of godhead. If the jazz avant garde can still be viewed, ultimately, as an inherently positive movement, there are few artists doing more than William Parker to keep that hopeful fire burning."
–The Wire, Daniel Spicer

All compositions by William Parker;
Eternal Is The Voice Of Love by Parker/IOTS;
Drum & Bass Interlude by Parker/Drake;
published by Centering Music (BMI)