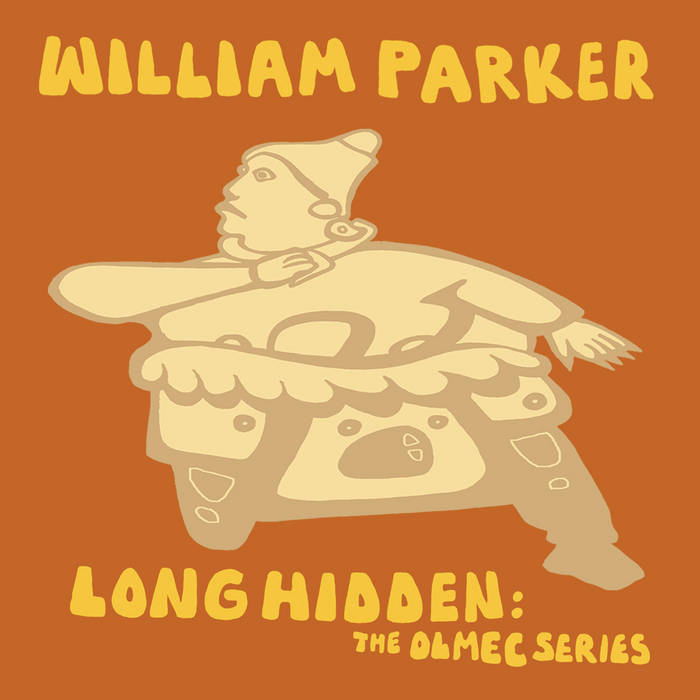 A Man Lost In Time

The album opens with an arrestingly spacious solo bass performance of the traditional hymn “There Is A Balm In Gilead”, one of William’s favorites. It continues episodically with music from three different sessions. the title track is a series of solo pieces on the 8-string doson ngoni (traditional hunter’s guitar from West Africa). William was introduced to the instrument in 1975 by Don Cherry. Parker writes in the liner notes, “I had already owned a kora, but it was the Ngoni that made my heart sing. This music is daily music. It is connected to the people sitting on the porch after supper, playing that old guitar, a suspending time of tuning and detuning dreams.” The two further compositions on solo bass are rendered with a bow as prism across the strings, further revealing William’s theory of music as sound is light and light is sound.

The third session, launching off the grid, are four pieces by The Olmec Group. These tracks are at the crux of Long Hidden – mysterious and entrancing sound poetry embracing the Caribbean and Middle America via inspiration drawn from the Great Stone Head of the Olmec. Further to William on percussion and 6-string doson ngoni, the group is comprised of Dave Sewelson: the veteran saxophone player who has been active on the creative music scene for the last forty years, Todd Nicholson: a formidable presence on the bass who when not leading his own bands (at the time) was an elemental member of violinist Billy Bang's band, and – Omar Payano, Isaiah Parker, Gabriel Nunez and Luis Ramierez – all fresh into their 20s, who play merengue music. William writes: “It is the sound of hieroglyphics coming off the scroll or stone wall and marching onto boats that will soon set sail. Where these boats will land I don’t know, this new journey is just beginning.”

+ CD-only bonus track: "In Case of Accident" (14m) originally appeared on Parker's self-released cassette album, Painter’s Autumn, in 1994. A truly epic tour-de-force solo bass piece recorded live in Montreal in 1993 that =shreds= and has left all whom I've played it for breathless / awestruck. I first heard it during the production of this CD and asked William if it could be included as a first edition bonus track. –SJ


"Thus, once Parker's sublime opening solo extemporisation on the hymn 'There Is a Balm in Gilead' is over, an eight-string African ngoni picks out a delicate melody before the band launches into a beautiful mess of intercontinental polyrhythms and unselfconsciously uplifting tunes, conjuring impenetrable hieroglyphs and crumbling lost cities while batting away the vibes of world-music fusion with some suitably downtown sax skronk. Superb." –Stewart Lee, The Sunday Times (London)

"Everyone should be listening to New York City bassist-composer William Parker’s albums on AUM Fidelity. The personality and instrumental voice of each record is always distinct; Parker’s musical and spiritual convictions always articulately reaffirmed. This is music for people who love to hear music — spilling from windows and cars, reflecting the movements and tones of everyday moments. Most jazz albums stake some claim about uplifting the spirit, but Parker’s albums have the warmth and weight to actually do it."
–Sam Sweet, Stop Smiling

"There is an uncompromisingly full-blooded charge in the arrangements whose staccato phrasing and thickly entwined rhythms sport a decidedly danceable character. It reinforces the point that William Parker has brought a very real spirituality as well as globally-inflected virtuosity to contemporary jazz." –Kevin Le Gendre, Jazzwise

"On a par with the world music fusions of Don Cherry, Long Hidden is an invigorating addition to a field of music easily bogged down with tepid crossover attempts. This is the real deal: raw, primal, soulful and expressive to the extreme." –Troy Collins, All About Jazz

"Infectious music that rides the rail between free jazz and Afro-Latin polyrhythmic glee. This is inner-space music that seeks to do nothing less than map out where the infinite resides within all of us and how to get there." –Saby Reyes-Kulkarni, The Pitch

All compositions by William Parker, © Centering Music (BMI)
except "There is a Balm in Gilead" (traditional)
& "El Puente Seco" by Tatico Henriquez